The Sac Bee has the survey story:

The poll [PPIC] found that 69 percent of adults support the Common Score approach to teaching, a system that’s being adopted by a majority of the states as a way of ensuring that students leave public schools with skills in a variety of areas.

The change has been controversial, especially in other states, with those on the political right complaining that it will lead to federal control of school curricula. The concept was promoted by a bipartisan coalition of governors to replace the state-by-state determinations of what should be taught, how instruction should be given and how academic progress should be assessed.

The PPIC survey found that support was over 50 percent among all political subgroups but Democratic support was highest at 72 percent, while that among Republicans was 60 percent and among independents, 61 percent.

I am not surprised, as I am willing to bet those in favor of Common Core have not read the implementation guides. I am not sure they would understand if they did. Here is an example: 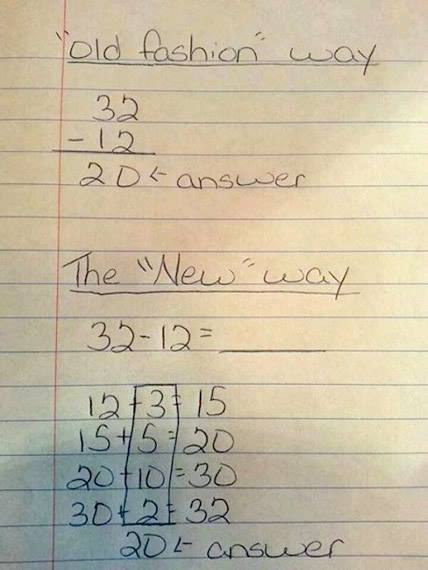 The dumbing down of elementary school children has reached epidemic proportions. They can no longer make any informed decisions due to the quantity of misinformation, falsities and deliberate use of distraction, all while imposing academic standards that most people cannot understand. When your child, or grandchild, come for help, will you as a parent, or grandparent, understand the “New Way”. Will Teachers?

Did you understand the New Way? How long did it take you to figure is out the problem above?

Freelance writer and climate change blogger. Russ spent twenty years in the Air Force as a navigator specializing in electronics warfare and digital systems. After his service he was employed for sixteen years as concept developer for TRW, an aerospace and automotive company, and then was CEO of a non-profit Internet provider for 18 months. Russ's articles have appeared in Comstock's Business, Capitol Journal, Trailer Life, Monitoring Times, and Idaho Magazine.
View all posts by Russ Steele →
This entry was posted in California, Common Core, Human Behavior. Bookmark the permalink.