The new fissures, first observed early this morning, are approx 1-2 km long and there are some indications that some activity could have started beneath the Dyngjujökull glacial ice (perhaps increased gas emissions only at the moment); the observed depression on the glacier have deepened – as a result of melting beneath, likely from new (eruptive?) fissures developing there.

The smell of rotten eggs (H2S gas) has been reported coming from the water of the Jökulsá á Fjöllum river, indicating contamination with volcanic gasses.

Civil Protection and IMO warn about toxic gasses released from the eruptive fissures, very dangerous if you are downwind: these include high concentrations of SO2, CO, CO2, fluorine gases and others. A steam plume is rising approx. 5 km above the eruption.

As of tonight, the lava flows have come within 1 km from the Jökulsá á Fjöllum river; once the lava meets the river, explosive interaction of lava and water will generate small to medium-sized explosive activity and produce ash plumes. However, the latter will be small compared to what is now expected to occur in the near future if an eruptive fissure opens under and the eruption breaks through the ice of the Dyngjujökull glacier.

New eruptive fissure in the Holuhraun eruption is much closer to the Dyngjujokull glacier than the previous ones, and creeping towards the glacier, says volcanologist Armann Hoskuldsson, who surveyed the new fissure this morning. Volcanic tremor indicates the fissure opened around 4 AM.

Geologists working near the Holuhraun eruption north of Vatnajokull have been called back, as increased volcanic tremor has been detected in the vicinity. GPS measurements show that the magma intrusion has increased since the beginning of the current eruption and a rift valley has formed.

Seismometers at the Icelandic Met Office have in recent minutes shown increased low-frequency tremor at stations near the northwest part of Vatnajokull. The Civil Protection Agency has now called everyone back who was near the fissure in Holuhraun, due to concern that the eruption could be getting bigger, or that magma could break the surface at another location. No changes in the eruption have as of yet been confirmed.

According to the conclusions of the latest Scientific Advisory Board of the Civil Protection Agency, posted at noon today, the volume of the dike intrusion from Bardarbunga volcano towards the north has increased since the beginning of the current eruption in the Holuhraun lava field. This is taken to signify that more magma is entering the dike than is being erupted.

This report is from VOX which has some excellent photos:

Iceland’s Bárðarbunga volcano began erupting once again early Sunday morning — with lava flowing out of a mile-long fissure in the Holuhraun lava field.

The lava fountains themselves have been spectacular, reportedly reaching up to 200 feet in the air. Here are a few photos taken by Ármann Höskuldsson, a geologist with the University of Iceland who is on the scene: 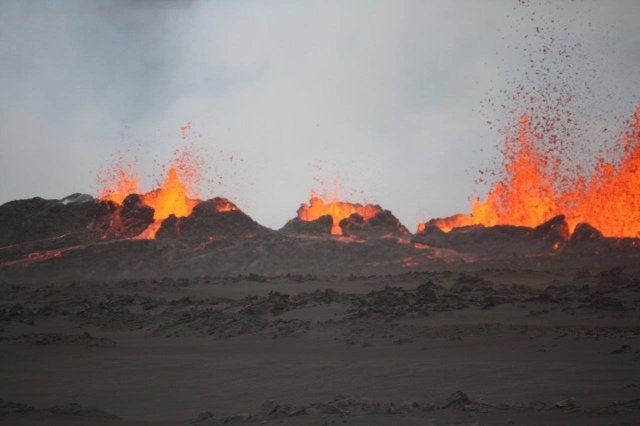 This eruption is not producing clouds of gas and dust, which could produce world wide climate change like previous Icelandic eruptions. So far it does not appear any of the the eruption is taking place under the glacier, but stay tuned.

Freelance writer and climate change blogger. Russ spent twenty years in the Air Force as a navigator specializing in electronics warfare and digital systems. After his service he was employed for sixteen years as concept developer for TRW, an aerospace and automotive company, and then was CEO of a non-profit Internet provider for 18 months. Russ's articles have appeared in Comstock's Business, Capitol Journal, Trailer Life, Monitoring Times, and Idaho Magazine.
View all posts by Russ Steele →
This entry was posted in Analysis, Climate, Volcanic. Bookmark the permalink.