Sarah Arnett a PhD in Public Policy at the Georgia State University has developed a method for assessing the fiscal condition of states. Her evaluation of the 50 states is published in a Working Paper for the Mercatus Center at George Mason University. 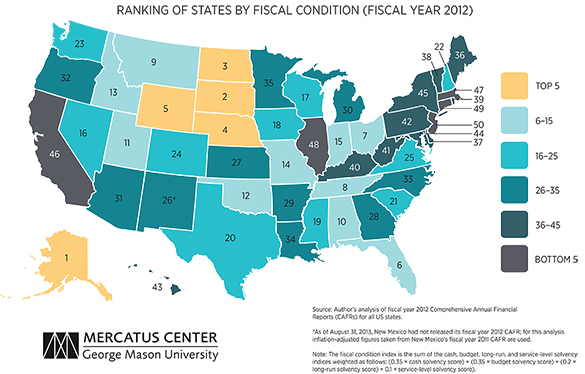 The study and details are linked at the Mercatus Center navigation button above.

Freelance writer and climate change blogger. Russ spent twenty years in the Air Force as a navigator specializing in electronics warfare and digital systems. After his service he was employed for sixteen years as concept developer for TRW, an aerospace and automotive company, and then was CEO of a non-profit Internet provider for 18 months. Russ's articles have appeared in Comstock's Business, Capitol Journal, Trailer Life, Monitoring Times, and Idaho Magazine.
View all posts by Russ Steele →
This entry was posted in California, Economics, Jobs and Economy. Bookmark the permalink.
%d bloggers like this: