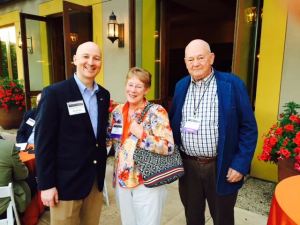 Ellen and I were stationed at Offutt AFB, outside of Omaha Nebraska for five years.  We enjoyed our time in Nebraska, but decided to retire to California.  On Saturday, following a Mercatus Center presentation 50 States, 50 Laboratories for Reform, Peter Ricketts, the current Governor of Nebraska introduced himself, as we were holding follow up  discussions with the speaker Scott Beaulier, the Executive Director of Arizona State Universities, new Center for the Study of Economic Liberty.

Later in the evening Ellen and I, and our traveling friends the Rebanes and Buhlers, had an opportunity to chat with the Governor Ricketts while we enjoyed a glass of wine before dinner.  After sharing our Nebraska stories and letting the Governor know our youngest daughter was a “Cornhusker” the conversation tuned to economics in the state of Nebraska.  The Governor revealed that he had launched an initiative to lure California’s dairy and poultry farmers to Nebraska.  He was very adamant about Nebraska’s ability to support these industries, freeing them from the growing regulatory environment in California, thus lowering the cost of chicken and milk products for the whole nation.

In a state known for its huge agricultural economy, the California poultry industry has an enormous impact producing sales in excess of $2.5 billion annually, making it one of the state’s agricultural leaders. The California poultry industry provides jobs for over 25,000 people throughout the state and indirectly to tens of thousands more in affiliated industries including trucking and feed suppliers. California poultry industry employees earn more than $250 million annually, working in a variety of jobs from farm managers to processing plant workers, researchers, accountants and poultry executives.  [California Poultry Federation] According to data released by the USDA’s National Agricultural Statistics Service Feb. 21, California milk producers had just under 1.8 million head of dairy cattle as of January 2014, with total production of 3,624 million pounds, up 4.7 percent from a year earlier… leading the nation in milk production.

We knew that Texas and other states were seeking to attract California’s manufacturing companies, which were under the regulatory gun in the state, but this was the first time we were aware that another state has a program to attract a significant portion of our agricultural industry.

The ads for California Cheese may soon be ads for Nebraska Cheese.

Freelance writer and climate change blogger. Russ spent twenty years in the Air Force as a navigator specializing in electronics warfare and digital systems. After his service he was employed for sixteen years as concept developer for TRW, an aerospace and automotive company, and then was CEO of a non-profit Internet provider for 18 months. Russ's articles have appeared in Comstock's Business, Capitol Journal, Trailer Life, Monitoring Times, and Idaho Magazine.
View all posts by Russ Steele →
This entry was posted in Uncategorized. Bookmark the permalink.
%d bloggers like this: