As the current drought progresses, Governor Brown continues to bring up the threat of wild fires, claiming they are increasing in frequency and intensity as the drought progresses. Lets look at some Wildfire Activity Statistics, developed by the CA Department of Forestry and Fire Protection. 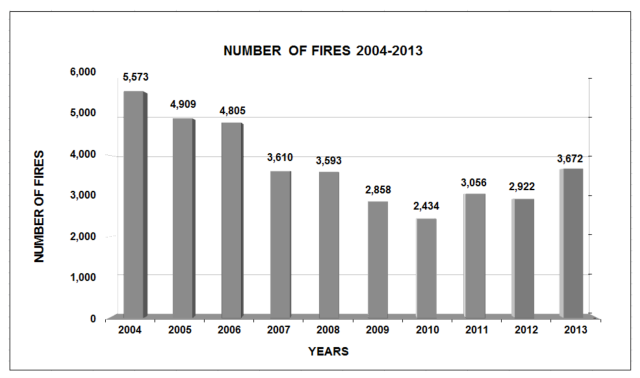 While it is true that from 2010 to 2013 the number of fires increased, but if you look at the larger picture, we can see there were far more fires before the current drought stated.  The validity of the Governor claim depends on the beginning and end points he selected for his argument.  What about the intensity claim?

Again, as you can see there were more acres burned before the drought started. The Governor is factual if he picks a starting point of 2010.

After looking at the numbers with more fires and more acres burned form 2004 to 2008, which are years not part of the current drought, one has to conclude the Governor is not being square with the people of California.

Freelance writer and climate change blogger. Russ spent twenty years in the Air Force as a navigator specializing in electronics warfare and digital systems. After his service he was employed for sixteen years as concept developer for TRW, an aerospace and automotive company, and then was CEO of a non-profit Internet provider for 18 months. Russ's articles have appeared in Comstock's Business, Capitol Journal, Trailer Life, Monitoring Times, and Idaho Magazine.
View all posts by Russ Steele →
This entry was posted in Analysis, California, Climate, Drought. Bookmark the permalink.