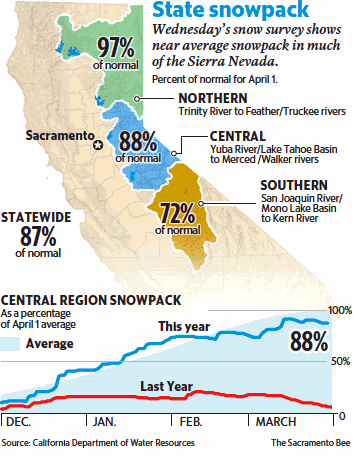 “I think it’s premature right now,” she said. “I think we need to see what happens in April … an important month for water.”

The State Water Resources Control Board will revisit its conservation mandates in May. Max Gomberg, climate and conservation manager, said the board likely will move to “a more regional framework” in which different areas face different targets, depending in part on the health of their water supply.

“We’re sensitive to what local water agencies are going through, trying to keep customers conserving when the customers can see how much rain there’s been,” Gomberg said.

It is hard to continue conservation measures when dam spillways are full of water on its way to the ocean. Not flushing the toilet and short showers just do not make good sense,  especially when the Water Agencies are pushing  good flushing and shower water down the Sacramento River to the ocean.  The mind rebels and you go back to flushing and extending the shower and extra five minutes.

Freelance writer and climate change blogger. Russ spent twenty years in the Air Force as a navigator specializing in electronics warfare and digital systems. After his service he was employed for sixteen years as concept developer for TRW, an aerospace and automotive company, and then was CEO of a non-profit Internet provider for 18 months. Russ's articles have appeared in Comstock's Business, Capitol Journal, Trailer Life, Monitoring Times, and Idaho Magazine.
View all posts by Russ Steele →
This entry was posted in California, Drought. Bookmark the permalink.