Last year, as all Hell was breaking loose in California as residents were burned out of their homes, neighborhoods and businesses, Gov. Jerry Brown was jetting around the world spouting climate change propaganda. He’s been calling this California’s ‘new normal.’ 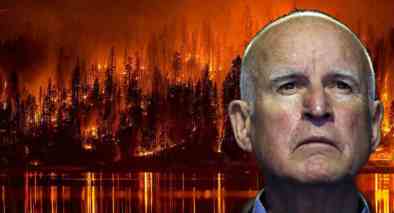 “With climate change, some scientists are saying Southern California is literally burning up, and burning up as maybe a metaphor or a description not just to the fires right here, but what we can expect over the next years and decades,” Brown said.

Today, as California burns once again under torrential wildfires, many Californians have been asking why the dramatic increase in wildfires in the last five years… that is everyone except Governor Jerry Brown. Governor Brown claims that year-round, devastating fires are the “new normal” we must accept.

Megan Barth and I reported Monday:

“Supporting Obama-era regulations have resulted in the new normal: an endless and devastating fire…

Freelance writer and climate change blogger. Russ spent twenty years in the Air Force as a navigator specializing in electronics warfare and digital systems. After his service he was employed for sixteen years as concept developer for TRW, an aerospace and automotive company, and then was CEO of a non-profit Internet provider for 18 months. Russ's articles have appeared in Comstock's Business, Capitol Journal, Trailer Life, Monitoring Times, and Idaho Magazine.
View all posts by Russ Steele →
This entry was posted in Uncategorized. Bookmark the permalink.
%d bloggers like this: