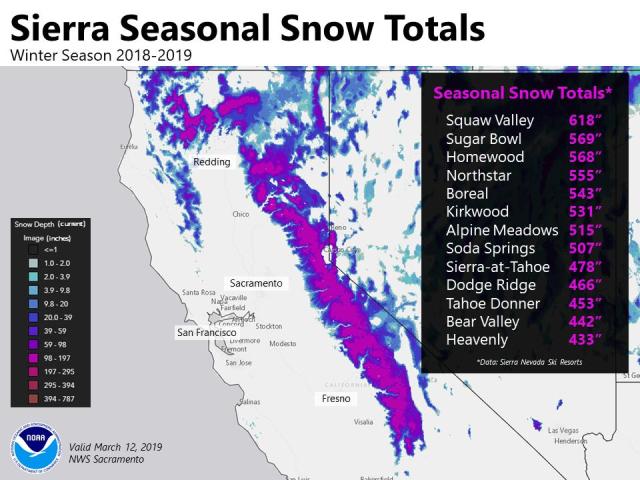 It was a similar snowpack in the winter of 1861 – 1862 that as melted by an atmospheric river of warm rain that pelted the state for a month melting the snow, which flooded the valley, with the flood water rising to the second floor of the homes and building in Sacramento.

One description of the impact of the flood;

The event was climaxed by a warmer, more intense storm with much more rain that was much more serious, due to the earlier large accumulation of snow, now melted by the large turbulent heat fluxes into the snow over the lower elevations of the mountains. Throughout the affected area, all the streams and rivers rose to great heights, flooded the valleys, inundated or swept away towns, mills, dams, flumes, houses, fences, and domestic animals, and ruined fields. An early estimate of property damage was $10,000,000. However, later it was estimated that approximately one-quarter of the taxable real estate in the state of California was destroyed in the flood. Dependent on property taxes, the State of California went bankrupt. The governor, state legislature, and state employees were not paid for a year and a half. 200,000 cattle drowned, and the state’s economy shifted from ranching to farming.

Bottom line, with a super snowpack in place and the potential for warm spring rains, we could have another mega flood. Watch the weather reports for atmospheric rivers of warm rain.

Freelance writer and climate change blogger. Russ spent twenty years in the Air Force as a navigator specializing in electronics warfare and digital systems. After his service he was employed for sixteen years as concept developer for TRW, an aerospace and automotive company, and then was CEO of a non-profit Internet provider for 18 months. Russ's articles have appeared in Comstock's Business, Capitol Journal, Trailer Life, Monitoring Times, and Idaho Magazine.
View all posts by Russ Steele →
This entry was posted in Analysis, California, Weather. Bookmark the permalink.